For Networking class we got an assignment to develop a server and client application for exchanging and synchronising files. Basically a simplified version of Dropbox, Google Drive, Microsoft OneDrive, etc.

Client-server communication is done by sending out requests and response in UTF-8 JSON format over a TCP connection. Here the server would listen for new requests to handle that were sent by a client. The client does not listen for requests from the server. The client itself has to ask the server to check for any modifications on the server side.

The content of a request from the clients uses the following format:

The server will read the request one character at a time and detects the end of the request when the JSON is closed. Next, the verb and protocol version are validated and he verb is used to determine the action the server must perform. Once the server processed a request, with or without success, it will send a response to the client with the result.

The content of a response from the server uses the following format:

The protocol supports the following types of request that can be sent as a verb as well:

LIST requests a list of all files on the server side. This requests contains an empty JSON body.

GET requests a specific file by it's name. The UTF-8 filename is sent in the JSON as a base64 string.

PUT sends a file to the server. Here, the JSON contains the following properties:

DELETE removeds the file by it's name. Here, the checksum is also supplied so the server can check if the file to remove is the same version as the version that the client specified. If not, this will cause a conflict and the file cannot be removed.

The protocol supports only a single verb called "RESPONSE". The client already knows the format of the JSON that is returned by the server, by the type of request that was originally made. Every type of response provides a status that describes if the request was succesfully processed and, if not, what the cause of the failure was.

The response of a LIST request contains a list of files present on the server. Each file contains a filename and checksum.

The response of a GET request contains the name, checksum and content of the file.

The response of a PUT or DELETE request, or a generic error, only contains the status and no other information.

The protocol supports the following statusses:

While the protocol itself was very well specified in a lot of details, a choice was made in the early stages that caused a lot of limitations. It was decided to transfer data using requests in JSON format, where file content was to be converted to base64.

The problem that arose was that in order to process JSON, you would first have to read the JSON contents in it's entirety. Afterwards, the content would also have to be decoded from base64 into raw binary data. Only then are you able to write the file data to the file system. This of course would require a lot of memory. This made the protocol unsuitable for larger files. In fact, the parser we used for converting the JSON already had problems with files over 50 MB!

Our group was responsible for building the applications that would work using the protocol the other group designed.

The applications were built using the .NET framework and are made up of server and client console applications, as well as two libraries.

This library contains the entire implementation of the protocol by making available the SyncServer and SyncClient classes.

The SyncServer uses a TcpListener to listen for new TCP connections that are started by a client. A new connection is handled on a new thread. There, the request will be read from the TCP stream according to the protocol specifications, validated and converted to an object to work with. Depending on the verb of the request, a corresponding callback method is triggered with the request object as an argument. These callback methods can be implemented by a server application to handle the request and create a proper response. Once a request has been handled or a (validation) error occured, the server will convert the response object and send the data back to the client by writing it to the TCP stream.

The SyncClient contains the methods for sending and request data to and from the server. When executing one of the methods, the client sets up a connection to the server using a TcpClient. This is done on the same thread. The request data is then created according to the protocol specifications and sent to the server by writing it to the TCP stream. The client then waits for a response from the server, reads the response data and converts this data to a response object to work with. A client application can use these methods for exchanging files with the server.

This library contains shared utilities used by the server and client console applications. The lbirary contains a ChecksumManager for creating and storing checksums of synced files. It also contains a FileManager to work with the physical files that are exchanged between client and server.

The client console application implements the SyncClient from the Protocol library. This application also runs indefinitely but accepts more commands from the user.

After the initial sync a FileSystemWatcher is used to detect any changes to the file system. When changes to files are detected a new sync is performed. This sync can also be forced by typing the "sync" command. If you only want to check the status of the files without syncing, the "list" command can be used instead. 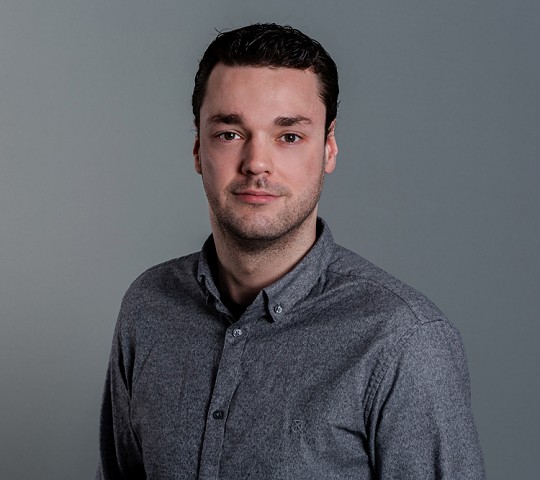